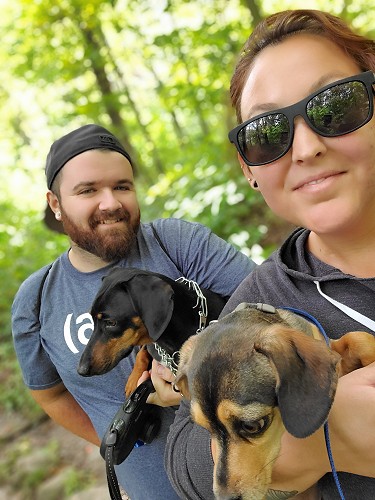 Note from Tim: Perhaps the greatest honor of this work is the opportunity to meet so many courageous cancer patients and survivors, to hear their stories of strength and grace and perseverance and, on occasions like this, share those stories with others within our Local Cancer Community!

As I previously shared, Emily contacted me on September 1st through an e-mail that read, “I was just reading through the bulletin and had a thought. I would really like to participate in a virtual run/walk this fall. I haven't been able to find any, so I'm wondering if we could do one to benefit SCCCF. It would be great exercise and a way to raise money!”

I am honored to share at least part of Emily’s story with you as she shared with me in a recent conversation:

Above Photo: A recent photo of Emily and her husband Mike (with Odin and Nala) during a hike in the nearby Northern Kettle Moraine State Forest! Emily invites you to join her along with her family and friends in celebrating her Golden Birthday while raising funds for SCCCF!

I had a lingering cough!

I just thought it was either allergies or a cold, so I didn’t make too much out of it. Then one day I was cleaning my house and I felt this crunching in my ribs that was accompanied by intense pain. So, I went in to see a doctor and they did a chest x-ray and noticed a spot on my lung. At first, they thought I had pneumonia, but following a course of antibiotics, the spot did not go away.

From there I was referred to a pulmonologist who did a CT scan and looked further but still couldn’t determine what it was so he did a bronchoscopy (put a tube down my throat into my lungs). While in my lung, the doctor also noticed a bunch of lymph nodes that didn’t look right. They took some samples and sent that to a lab and the results came back as stage III adenocarcinoma.

Being 23 years old, I never imagined a diagnosis like that!

When I first heard the words "you have cancer" I was honestly sick to my stomach and went into panic mode. I couldn't think. Being 23 years old, I never imagined a diagnosis like that. I was active and healthy, just moved in with my boyfriend, graduated nursing school and started working. My life had to come to a complete stop.

The first step in treatment consisted of thirty days of intense radiation followed by two rounds of chemotherapy with two different drugs for six weeks after which I was re-scanned and there was no improvement. In fact, the spot on my lung actually got slightly bigger.

So then I had bio-marker testing that looks at the genetics of the cancer and I tested positive for the EGFR mutation.

EGFR stands for epidermal growth factor receptor. EGFR’s job is to help cells grow and divide. In the case of EGFR-positive non-small cell lung cancer (NSCLC), a mutation, or damage, in a gene causes the EGFR to remain stuck in the “on” position. This “drives” abnormal cell growth, which is what cancer is.

EGFR-positive lung cancer is more common in certain populations, such as:

• people who have never smoked or only smoked a little.

So, after radiation and chemotherapy didn’t work, I met with an oncologist who specializes in EGFR-related lung cancers who actually told me that they actually see this a lot all over the world. I happened to be one of the youngest! She prescribed a medication that is designed to address the mutation. Following a couple of months on this medication I was re-scanned and re-scoped and my cancer started shrinking!

At that point I had surgery to remove the right upper lobe of my lung where the primary tumor was and they also removed the lymph nodes in my mid-chest. This was followed up with adjuvant chemotherapy to eliminate any remaining cancer cells. Now I am back on the medication for the EGFR mutation and will be on it for probably the next two years. Initially, they thought a 12-month course of this drug was curative, but recent studies have shown that a three-year course offers a much better survival rate, so they advised I stay on it for another two-years!

It does have some side effects similar to IV chemo; fatigue, nausea, infections, blood clotting; but they haven’t been as bad as IV chemo.

I did a few things along the way!

I was diagnosed on May 30th of 2018. So it’s been about two years and three months! But I did a few things along the way! I got engaged and I got married!

After they removed the upper lobe of my affected lung and after the adjuvant chemotherapy, Mike and I took a trip to Florida and he asked me to marry him! We got married this past August!

We wrote our own vows for our wedding. And, in my vows, I wanted to express how he has really stuck by me and how difficult it must have been for him while I was sick!

I’ve read that a cancer diagnosis is just as hard if not harder on everyone else other than the cancer patient. I can’t imagine how difficult this was for both my mom and dad... to see their daughter go through something like this. And I’m sure it was equally as hard on my husband. Especially since it was all so unexpected for all of us!

The advice I would give someone just starting their journey is to live your life positively, do things you really enjoy, be around people you love, and be an advocate for yourself! I think that’s what cancer has taught me. Of course, people should live that way regardless, but I think it becomes more important with cancer... especially being an advocate for yourself!

The Cancer Care Fund helped me out so much!

I stopped working on July 11th of 2018 when I had my first round of chemo and I just went back to work earlier this month! The rental assistance that I received from the Sheboygan County Cancer Care Fund was a huge help for me! I really don’t know what I would have done without it!?! I might have had to move back in with my parents! Not that that’s the worst thing in the world... I have great parents! But it certainly wasn’t something I really wanted to do!

Through the Fund I also was able to experience a “Day of Relaxation” at the Kohler Waters Spa, which was amazing, as well as enjoy the benefits of massage from Kris Angermeier of Curative Therapies who does such a great job!

I just want to give back!

I love to exercise and I love to walk. I tried to exercise as much as I could since this all began but there were times, like following the surgery and during chemotherapy, when I just couldn’t. But, since January of this year I’ve been walking and hiking just about every day! So I thought it would be cool to have a VIRTUAL event where we can all do something we enjoy while raising some money for the Fund! I plan to promote this with all of my family and friends and post it to my Facebook friends and welcome anyone who wants to participate. And I know from reading the Local Cancer Community Updates that there are other cancer patients and survivors that like to exercise... so they are certainly welcome to participate as well!

I’ve been participating in the “Hunting for a Cure” event over the past few years! In fact, my husband won a gun at the event this past year. That is such an amazing event! I realize this will be a smaller event, but I had said to myself when I was getting help, that when the time came, I would do my best to pay it back! I’m a strong believer in that... and I thought this would be one way to do that!

NOTE FROM TIM: Thank you Emily for sharing your story and for your efforts to “give back” and support the mission of the Sheboygan County Cancer Care Fund!