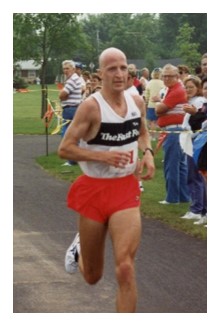 The World According to Tim: What It Means to Me to “Survive, Thrive & Be Fit” on My 29th Cancer-versary!

I first heard those life-altering words “You have cancer!” on May 11th, 1992. Although it was 29 years ago this month, the day remains about as fresh in my mind as if it was just 29 days ago.

I was alone when I heard those words. But I was used to being alone. I was a single, 29-year-old distance runner who represented the epitome of “the loneliness of the long-distance runner.”

I had been training to qualify for the U.S. Olympic Trials in the marathon. A few months earlier I crossed the finish line at the Las Vegas Marathon in 2:20:39, just missing the 2:20:00 qualifying time. A swollen lymph node in my neck sent me to my primary care physician. A failed dose of antibiotics sent me for a biopsy. But I wasn’t worried... I was in the best shape of my life!

I drove straight home after hearing those words and laced up my running shoes and headed out for a run. It was the only thing I could think of to do! I would run past my mom and dad’s house, where I would stop to tell them the news, and then continue my run.

I would meet with Dr. Matthews at what is now known as the Carbone Cancer Center at UW-Madison where I would receive my first couple rounds of chemo. A few months later (July, 1992), he would open his private oncology practice here in Sheboygan. I like to think he came to Sheboygan to treat me. He’ll probably tell you otherwise! 😊

Honestly, cancer treatment that included chemotherapy and radiation was not as bad as I thought it would be. Being young, healthy and fit certainly had a lot to do with that. In fact, I continued to train and even compete throughout treatment and would win several local road races that summer and fall while undergoing treatment including the 1992 Hollandfest Run (photo above), albeit with a slower-than-usual time. Three months later, after more than four-months of treatment, I would win the 1992 Road America 4-mile run.

Please understand, I share that not to brag or boast but to praise and tout the benefits of exercise and activity! I am no longer the dedicated (or obsessed) runner that I once was and no longer have the same level of fitness of my younger days. But I have discovered a wide variety of other ways to move and exercise my body and I continue to experience the profound benefits of exercise and living an active lifestyle.

Interestingly, it was about the time that I began to look for different physical activities other than running that we began “Survive, Thrive & Be Fit.” In fact, in fall of 2009, I wrote a piece for the TLC Supportive Newsletter on that topic (I’ll repost that piece along with this piece at www.scccf.org/blog). A few months later (February of 2010) we offered the first SCCCF “Survive, Thrive & Be Fit” activity – a Gentle Yoga for Cancer Survivors session! I’m not saying the two are connected, but it seems that as ST&BF began adding different activities to its schedule, I found myself adding different activities to my exercise routine and my life! 😊

Every year on May 11th (my “cancer-versary”) for the past 29 years I have commemorated the occasion with some type of physical activity (running, kayaking, hiking, backpacking, etc.)! This year, to commemorate 29-years of survivorship, I initially planned to mark the occasion by exercising 29-minutes or more a day at least 29 days of the month of May. But almost immediately, I realized that was too easy. So, I made the challenge a bit more interesting: 29-minutes or more of exercise... 29 or more days of the month... and 29 DIFFERENT activities!

As I write this, I’m over halfway through the month and haven’t missed a day with a different activity! I have put a few creative twists on the dozen or so activities that I regularly engage in and have tried some new activities and I’ve been having a lot of fun!

I began thinking back on all of the many activities that we have offered through Survive, Thrive & Be Fit! I could just list them... but let’s make it a little more interesting.

In the chart that follows you will see three columns. The first column is blank for you to place your answer or guess. The second column lists (alphabetically) most of the ST&BF activities we have offered since 2010. The third column lists (chronologically) dates that we offered an activity for the first time. Your challenge is to match the activity with the date that it was first offered. I have provided the answers for the first activity and the most recent activity (as an example)!

Whoever gets the most correct (I’ll pull names out of a hat in the event of a tie) will receive a prize (I have a few vouchers leftover from the recent flower sale)!!!

Send in your answer by Wednesday, June 2nd and we’ll announce the winner at our June 6th visit to the Christopher Farm & Gardens where several of these activities will be offered!

Print this page, place your answers in column 1, scan or photograph and send to trenzelmann@physhealthnet.com by June 2nd to be eligible for a prize!