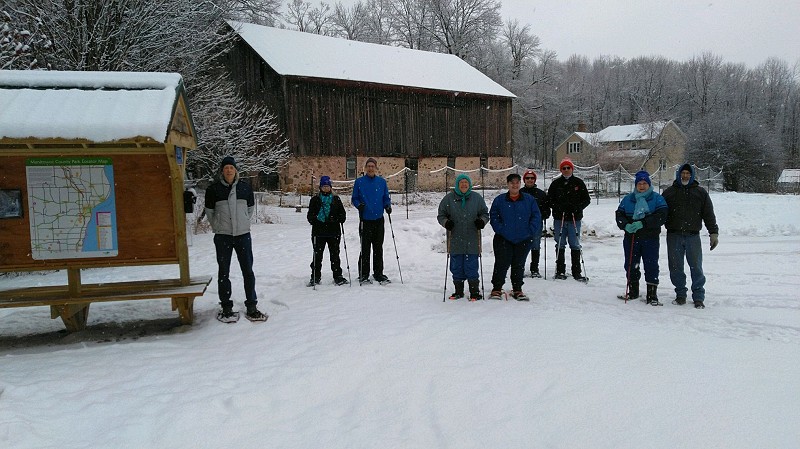 COVID-19: : It’s Not An Excuse for “Survivors on Snowshoes” or for “Hunting for a Cure”!

As I made the drive to Walla Hi County Park on Saturday, January 16th for a ST&BF “Survivors on Snowshoes” outing I was less-than-enthused. We didn’t get as much overnight snow as I had hoped for and I feared it may discourage others from participating. But even if no one showed up, the beautiful views of snow-covered trees along the way made the trip worthwhile!

You’d think I would have learned by now! Cancer survivors don’t let less-than-ideal conditions keep them from living life fully! Over a dozen cancer patients, survivors and co-survivors chose to enjoy whatever the day would bring! And we were NOT disappointed!

While keeping our distance (for the group photo and while snowshoeing), flurries fell from the sky as we started out. And long after the snow stopped falling from the sky, it continued to fall from the tree branches along this densely-wooded trail.

Dust of Snow, by Robert Frost

Has given my heart
A change of mood
And saved some part
Of a day I had rued.

I have a good friend and avid outdoor enthusiast who has often reminded me that the best way to experience the many wonders of nature is to simply put yourself “out there” in nature and pay attention to whatever happens! Days like this cannot be planned and they are never guaranteed. Those of us who put ourselves “out there” on this occasion were abundantly rewarded!

Our only disappointment was that, unlike past years, we weren’t able to enjoy the fun, festivities and fundraising efforts of the Hunting for a Cure event at Laack’s Hall that benefits SCCCF after our snowshoeing. We have scheduled a “Survivors on Snowshoes” outing on the third Saturday of January at this location for several years in conjunction with that event. But this year, due to COVID-19, most of the activities were cancelled. But not all! Many of the dedicated and responsible hunters that hunted together long-before the event was a fundraising event came together to hunt in a scaled-down and socially-distanced rabbit hunt. Others, dedicated to the event and the cause, found ways to raise some funds, including a virtual auction.

At last report, John Utech (founder of Hunting for a Cure) reported raising over $5,000 for SCCCF! “I know it isn’t as much as other years,” John admits, “but I figure it all helps and something is better than nothing!”

Those survivor-athletes that snowshoed as well as those hunters and supporters could have used COVID-19 as an excuse to just do nothing! Instead... they decided to do the best that they could!!! THANK YOU TO ALL!!!