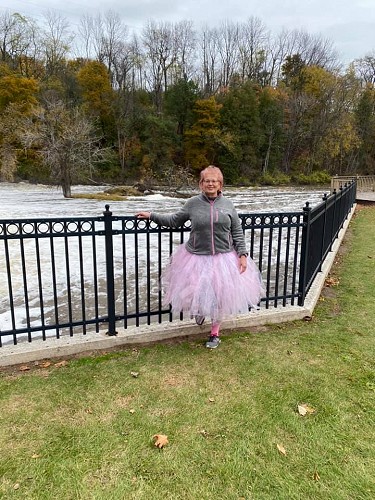 My Name is Sherry and Here is My Cancer Story!

My Name is Sherry and Here is My Cancer Story!

I was diagnosed with breast cancer on March 26, 2020 at 9:36 am. It was a Thursday. I can’t remember what I ate for breakfast some days, but I remember that morning vividly. I had an abnormal mammogram in January, and repeat scans showed a mass on the left. A follow up ultrasound did not show any mass. I was somewhat reassured, and the radiologist said I should get a repeat mammo in 6 months. But something about his response made me uneasy and being a nurse, I wondered what other options were available. The next step was an MRI, and I scheduled the test after a planned trip to Mexico. There is a history of breast cancer in my family, I wasn't able to feel a lump, and I felt well. I looked at the MRI as a good baseline screen for further comparisons. I wasn't worried....well maybe a little anxious.

I had an MRI on Friday March 13th. Never been superstitious (I am now). Not a horrible procedure, I had to lay face down on a hard table for about 30 minutes. Finished my day at work, never gave it another thought. Until Monday, when my OB called me to tell me I needed a biopsy. I was in the parking lot at Meier, getting the news sitting in my vehicle. The next few days are a blur.

Biopsy scheduled on March 24th-not pleasant-and although I was hopeful I had a sense it wasn't good just by the way the radiologist spoke to me after the procedure. I've been a nurse for 36 years and have a pretty keen sense of intuition. I can usually read people pretty well. But I still hoped the mass was benign. Unfortunately, it was not. I had a 3.2 cm lobular cancerous mass in my left breast. A mammo 13 months prior was normal (or was it?). Lobular cancer accounts for only about 20% of breast cancers, is harder to find and doesn't present as a well-defined mass as ductal carcinomas generally do. Since the mass was so large, and we were in the middle of the COVID pandemic, both my medical oncologist and breast cancer surgeon decided to start medication to shrink the tumor and delay surgery for a few months.

In August I had a partial mastectomy, and the initial pathology on several lymph nodes was negative. Final pathology unfortunately showed micro- metastasis to 2 out of 3 lymph nodes. I had a second surgery 16 days later to remove all the lymph nodes under my arm. All 12 were thankfully negative, further testing shows I don’t need chemotherapy, but 6 weeks of radiation and medication for at least 5 years.

As all cancer patients know, exercise is a good way to minimize recurrence. October is breast cancer awareness month, and my daughter signed up for a "virtual" challenge to walk 35 miles in a month and raise money for breast cancer. I was restricted from many activities, including yoga and other exercise due to my surgery, so I decided to participate in the walk too. I've always been a big supporter of cancer, contributing to fundraisers, donating to raffles, walking etc. But now that I was a cancer patient it took on a whole new meaning. All the traditional fundraising walks were now virtual because of COVID, and one night I had an idea –why couldn't I do my own fundraising walk? I asked my 2 daughters what they thought, and they were all for it. We picked October 25th, and at first, I didn’t think anyone would be interested – but I was so wrong. On that beautiful fall Sunday morning, 21 friends and family joined me on a hike at Settler's Park in Sheboygan Falls. Even my 2 grand-dogs joined us!

I work in Grafton where I am also getting my care and treatment, but I live in Sheboygan County. I wanted to do something positive during a very negative time in my life and give back not only to the wonderful center providing my care, but also to the community in which I live. My generous family and friends donated $1330 for breast cancer in honor of the walk!

I hope to be done with my 6-week radiation treatment on December 18th, right before the holidays. Cancer is ugly and an emotional roller coaster ride – and I HATE roller coasters. I'm looking forward the end of this journey, and as hard as it is, I try to be as positive as I can. Prayers for all who travel this journey, thanks for letting me share mine. Prayers for all the cancer warriors out there! Stay strong and keep fighting!

Click PDF below for complete issue with additional photos!