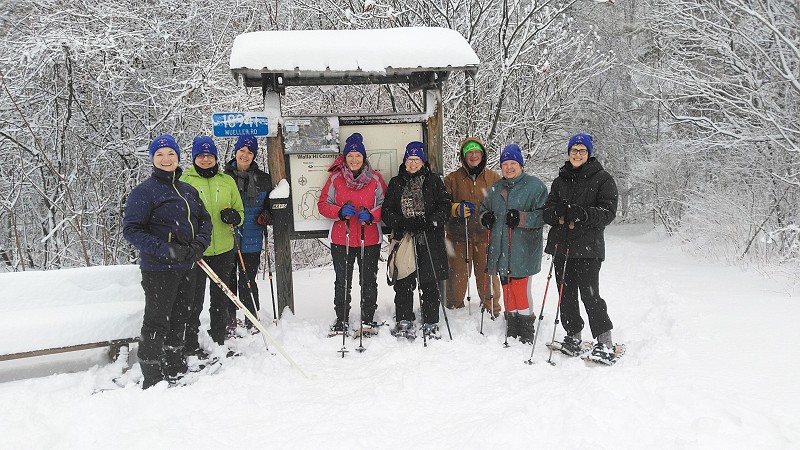 My day began early, shoveling multiple times as the plows came through before heading out on less-than-ideal road conditions (snow covered with blowing and drifting snow) to a “Survivors on Snowshoes” outing at Walla-Hi County Park! Admittedly, there were moments when I questioned my decision to venture out but I knew that, once I arrived, the conditions would be amazing, so I continued on with care and caution. I picked up one of our survivor-athletes who lives in the area and told her that I wouldn’t be surprised of the two of us were the only ones that would be there.

I should have known better! After all, these are cancer patients and survivors who have been through or are going through some really tough stuff! They’re not going to let a little white stuff get in the way of them living their life to the fullest! Ten survivors and one co-survivor braved the conditions and were rewarded with one of those special experiences that one can never plan for!

I could tell you a whole bunch of stories of spending the morning snowshoeing with these amazing survivor-athletes in what was truly a winter wonderland... but like so many things in life, words cannot do the experience justice! But, as they say, a picture is worth a thousand words. So I hope the photos will give you a CENTS of what a wonderful outing it was (photos can be seen in the attached Local Cancer Community Update)!

We spent almost two hours enjoying the surrounding beauty and good company while the snow continued to lightly fall, making our departure a bit challenging! But that’s not a problem for a group of tough-minded and strong-spirited survivors who, more-oft-than-not, are more concerned about the welfare of others than themselves and enthusiastically (but gently) “push” one another out of difficult situations with a smile!