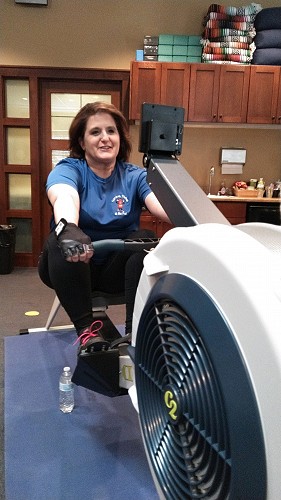 I define a “cancer survivor” as anyone who is alive today that has experienced a diagnosis of cancer... whether one-minute ago, one-week ago, one-year ago or one-decade ago. It matters not if you are in treatment or out of treatment... whether there is evidence of disease or no evidence of disease. If you’ve ever heard the words, “You have cancer!” and you are alive today... you are a cancer survivor!

I define an “athlete” as anyone who demonstrates a commitment to improving their physical fitness and abilities. It doesn’t matter of that commitment was made an hour ago, a month ago, a year ago or a lifetime ago! It doesn’t matter if you compete against others or just challenge yourself. If you are interested in and taking actions to move your body with the goal of reaching a greater physical potential... you are an athlete.

In the most recent January/February issue of Coping with Cancer magazine there is an article about Olympic Champion cross country skier and breast cancer survivor Kikkan Randall. I watched in 2018 when she teamed up with fellow American Jessie Diggins to win the freestyle team sprint, making history by winning the first-ever U.S. women’s Gold Medal in the sport of cross country skiing at the PyeongChang Winter Olympics! A few months later, on Mother’s Day of that same year, she found a lump.

You can read “the rest of the story” here:

As we all know, cancer does not discriminate... not even against the world’s fittest athletes. Kikkan is one of many elite athletes who has faced a cancer diagnosis.

Most of us, I suspect, would agree that being physically fit at the time of a cancer diagnosis offers many benefits as you proceed through the often grueling treatment. Similarly, I suspect that most of us would agree that exercise and activity has many benefits as we recover from cancer-related treatment. Many of these elite “survivor-athletes” are contributing to a growing mound of evidence related to important and beneficial role that exercise can play during cancer treatment!

“I actually rode my bike to and from each of my chemotherapy sessions. And that was my way of getting a little victory and a little activity every day.” - Kikkan Randall

Much has come forward about the many ways that exercise and activity can reduce some of the side effects of cancer treatment including nausea and fatigue. But there is much more to it than that.

Consider the work of Dr. Lee Jones, formerly of Duke University Medical Center and now with Memorial Sloan Kettering Cancer Center. Dr. Jones has become a leading researcher specializing in the field of exercise-oncology: the study of physical activity and its impact on cancer and cancer treatment.

He and his team are examining the benefits of physical activity beyond controlling the symptoms and side effects of cancer treatment to determine whether exercise itself can reduce cancer progression, reduce tumor growth and render tumors more responsive to anti-cancer therapies and improving the body’s response to treatment.

Dr. Jones admits, “Our findings on physical activity and cancer tumors are entirely fresh, and it may well take as long as 15 years to learn how to utilize this knowledge to benefit patients.”

But a growing number of cancer patients and survivors; like those who participate in SCCCF’s Survive, Thrive & Be Fit activities, those who have joined the LIVESTRONG at the Y program, those who participate in the Bridge to Wellness opportunity and those who are committed to their own exercise program and routine; aren’t waiting for science to prove what many of us have already come to experience and understand to be true.

I invite you to come and join us as we continue “Making Sheboygan County the Healthiest Place to Survive Cancer!”

And keep in mind, the many physical health benefits that exercise and activity may have for cancer patients and survivors is only “one side of the coin,” as I like to say! Consider these words that were shared Kirstin Opgenorth, one of our current “survivor-athletes,” during the re-CENT ST&BF Ten-Year Anniversary Recognition Lunch earlier this month:

My name is Kirstin Opgenorth. I am about a year and a half post-treatment for adenocarcinoma. I have said it before and I’ll say it again... I was given that slip of paper about this group when I was first diagnosed. But you’re given so much information and being told what you need to do. I thought to myself, “I don’t want this cancer. I don’t want people telling me what to do. I don’t want this piece of paper!” So, I just put it aside. It wasn’t until after all of my treatment had been completed and I was going through some of the information I was given that I came across this piece of paper again about the Sheboygan County Cancer Care Fund. I started thinking about it more seriously. Then a good friend of mine was diagnosed with cancer and she wanted to see what this group was about. Even though she didn’t show up, I started coming and I’m still here! It was the strongest group of people, the best group of people I could have ever been introduced to! The group of people that I thought I never needed is the group of people that I discovered I needed the most!

Survive, Thrive & Be Fit: For more information contact Tim at trenzelmann@physhealthnet.com or 920.457.2223.

LIVESTRONG at the YMCA: For more information about this FREE 12-week class at the Sheboygan YMCA with daytime and evening classes (a morning class is scheduled to begin later this month) and six-month YMCA membership contact Carrie or Denice at the Sheboygan YMCA -920.451.8004, ext. 130) (See attached flyer.)

Bridge to Wellness: For more information this 12-week class at the Sports Core in Kohler scheduled to begin on March 5th contact Matt Luders at 920.884.5774 or email: matt.luders@hshs.org. (See attached flyer.)