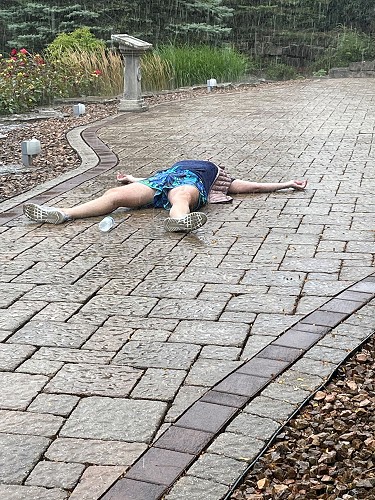 The World According to Tim: “It Might Not Be Easy, But It Will Be Amazing!”

I replied by explaining, “Sometimes (often times) the ‘positivity’ is as much because I need it... Perhaps as much, if not more than, anyone else!” 🥴

Life can be challenging... and I am not always a very positive person... but I make no apologies for that.

I have a rather practical, pragmatic, and realistic mindset. Under the right circumstances, that can lend itself to positivity. Other times, not so much. To be honest, I find a good balance of positivity and negativity to be not only helpful for a healthy outlook on life but (at least for me) necessary.

I realize that the thoughts that go through my head, the words that come out of my mouth, and the words I write (whether on paper or on screen) are seldom one-in-the-same. In particular, when engaged in the kind of expressive, reflective, creative writing that I hope others will read (like when writing articles for this Local Cancer Community Update) I often find myself writing about a world that I wish to see... more than the world that I actually do see! I often find the writer in me writing the words that, at the same time, the reader in me wants (or needs) to read.

I was wishing for sunny blue skies, pleasant weather, and enough wind to fly some kites. Instead, there would be mosquitoes to annoy me, rain to irritate me, and a lack of wind to disappoint me, resulting in frustration that our activities could not go on as planned. But today (Monday), after reflecting and writing about the time we shared at the CF&G I feel a greater (and, rightly so, more appropriate) appreciation for the day than I did as it transpired! Gaining greater appreciation for the things and experiences in my life that I write about, even if after the fact, is just one of the many benefits of this kind of writing.

Of course, nothing happens in a vacuum. Other things have happened: I had a good night’s sleep, I heard positive comments about the visit, and I saw the photos uploaded to www.scccf.org/contests.

One very powerful photo from Sunday’s event was submitted by Barb Bogenschutz. When she submitted it on Sunday night, I didn’t immediately recognize the person in the photo or understand what she was doing:

Then I read the caption that Barb included:

“My daughter, Jennifer, a recent adrenal gland cancer survivor, submitted to the rain during our visit on Sept 12.”

Tears filled my eyes! They weren’t necessarily “bad tears”, but they didn’t seem like “good tears” either. Sort of a mix of the good tears and the bad.

I have been hearing about Jennifer’s challenges over the past several months and it has been difficult to hear, so I can only imagine how difficult it has been to experience.

Seeing Jennifer sprawled out on the ground was a visual reminder of the struggles that she, and so many others, must endure in this life. It looks as though she has collapsed from exhaustion. The pain we all experience, day in and day out, must be recognized and should not be glossed over. And as Michael Stipe of REM reminds us through his lyrics, “Everybody hurts... sometime.”

But Jennifer also appears to be relaxed, as if she’s found a kind of peace with the world around her. Perhaps it was through her exhaustion that she found the strength to “submit” and let go. Paradoxically, letting go isn’t easy and takes a lot of hard work! Part of the work of “letting go,” I would suggest, is more about accepting the negativity in our lives rather than denying it, ignoring it, or thinking it doesn’t exist!

As they say, in life you have to put up with the rain if you want to see the rainbow! Thank you, Jennifer for reminding me that those rainbows don’t only exist in the sky... but in our hearts and in our minds as well! And they certainly exist in a place such as the CF&G, no matter what the weather might be!

In my response to Cory, I also continued, “If you watched the Olympics (or are watching the Paralympics) I'm sure you saw this commercial: https://youtu.be/fqWG5_7nwyk. I love it... Especially the message, ‘It might not be easy, but it will be amazing!’"

If you haven’t seen the above Toyota commercial, I strongly encourage you to watch it. I’m not promoting Toyota... but the message is powerful. We shouldn’t expect life to be easy. But we can expect it to be amazing!