World According to Tim: Stories with More Twists and Turns than the Road America Track!

I love stories. Stories inspire, teach, and entertain. As Jimmy Neil Smith, founder of the International Storytelling Center suggests, “We live in a network of stories. There isn’t a stronger connection between people than storytelling.”

And stories are quite powerful.

Stories, however, are far more complicated than we often realize. Seldom does a story stand on its own, all by itself. What may appear to be a single story is almost always a complex set of stories, each with distinct plots, characters, lessons, and meanings.

I choose to begin this story a couple months ago, when I received a call from Billy Kreutz, Treasurer/Sponsorship Director of the Wisconsin Camaro Club. Billy informed me that their club had chosen the Sheboygan County Cancer Care Fund as an event charity for their 2022 Camaro Rally that took place at the Road America track this past weekend (July 22-24, 2022). On behalf of SCCCF, I was thrilled by this honor and grateful for the support!

Billy had first learned about SCCCF from a good friend, fellow Camaro owner, and Wisconsin Camaro Club member who is currently undergoing cancer treatment who had received assistance from the fund to help cover the cost of an expensive medication.

I plan to meet with Billy and his friend with the intent of honoring that story by sharing it through this Local Cancer Community Update at a later time. In the meantime, here are a few personal stories that I have found myself pondering as a result of my involvement in this recent event at Road America.

As those who know me would attest, I am not a “car guy.” But I do have my own stories related to the Road America track. I visited the track for the very first time as a high school senior in early November of 1980 to participate in the annual Road America “Sole Burner” Run/Walk where I took first place, setting a course record for the 4-mile event of 20:23. 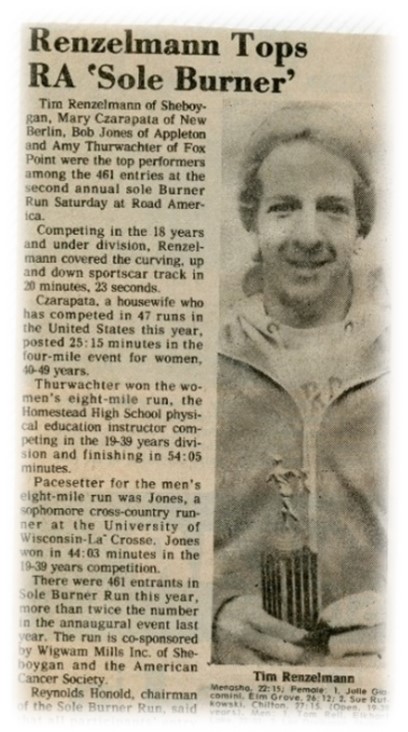 Photo Above: A Sheboygan Press article from November, 1980 that includes a photo of my 18-year old self.

I would return to the Road America Run/Walk many times over the years with a best time on the course of 18:56 set in 1990 (a course record that still stands).

I would return to run the event in the fall of 1992. My winning time of 20:37 was, at the time, my slowest (but I’ve run MUCH slower since). I had been diagnosed with cancer six months earlier and had just completed multiple rounds of chemotherapy and was at the tail-end of my radiation treatments at the time of the event. So, I was happy just to finish... I was thrilled to win!

But the most meaningful “story” for me was a few years later.

Following my initial diagnosis, I would experience multiple recurrences. By mid-1998, the disease had spread to my chest, abdomen, pelvis, and bone marrow. Under the care and direction of Dr. Matthews, I underwent an allogeneic bone marrow transplant that September at the University of Wisconsin Comprehensive Cancer Clinic (now known as the UW Carbone Cancer Center). Just a few days prior to the ’98 Road America Run/Walk I was released from the hospital. Although I wasn’t able to run (neither Dr. Matthews nor my transplant doctor thought it was a good idea – and I certainly owed it to them to listen) I did attend and connected with a very special group of friends who were a wonderfully “supportive community” throughout my personal cancer experience – the BRAT City Training Club! 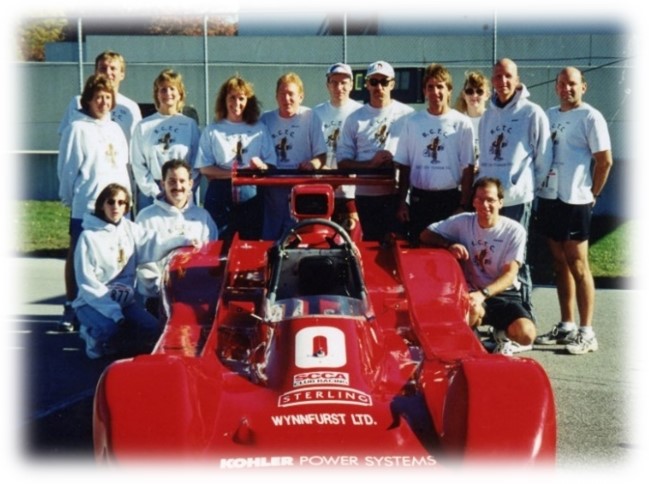 Above: Group photo of the “BRAT (Biking, Running, And Training) City Training Club prior to the start of the 1998 Road America Run/Walk.

Before I close, allow me to share a rather silly story that involves the BCTC and Road America. I’m not sure of the exact year, but I am guessing it was back in the 90s. A few weeks before the Road America Run/Walk, a few of us “bratsters” thought it would be fun to run the course prior to the event. So, on a cloudy Sunday morning in October, we met at Gate #3 - thinking no one would be on the track. We jumped the fence and jogged to the start/finish line. There didn’t appear to be anyone else on the track... so we began our run. By the time we reached turn #3, we could hear the sound of revving engines off in the distance. By the time we reached turn #5, we were being directed to “get off the track” before a race car came speeding by. We were younger than (and, it goes without saying, more foolish), so we made a fast dash back to the cars and got out of there! If anyone from Road America is reading this... I assure you, that never happened again!

These stories may very well seem irrelevant and rather silly to some. But I assure you that they are quite meaningful to me as the Road America track has marked some significant times in my personal cancer experience and has a special place in my heart. These stories greatly contributed to the joy I experienced at the Camaro event at Road America this past weekend and the gratitude and honor I felt in accepting a donation check on behalf of the Sheboygan County Cancer Care Fund from the Wisconsin Camaro Club for $4,000! These stories also explain why I was deeply and profoundly impacted by various aspects of the Camaro Rally (despite not being a “car guy”) and why I was so emotional on my ride home after the event on Saturday morning.

As I contemplate the many overlapping and interconnecting stories that have taken place along my personal cancer experience as well as within our Local Cancer Community that I have been privileged to hear (and occasionally be a part of), I find myself reflecting on Arthur Schopenhauer’s essay titled, “Transcendental Speculation on Apparent Design in the Fate of the Individual.” In this essay, Schopenhauer muses over the curious feeling one can experience of there being an author writing the novel of our lives, in such a way that through the many chance happenings that seem to occur in our lives, there is actually a plot unfolding of which we have no knowledge.

I’m not suggesting that my life has always made sense to me... but the plot has certainly kept my attention!