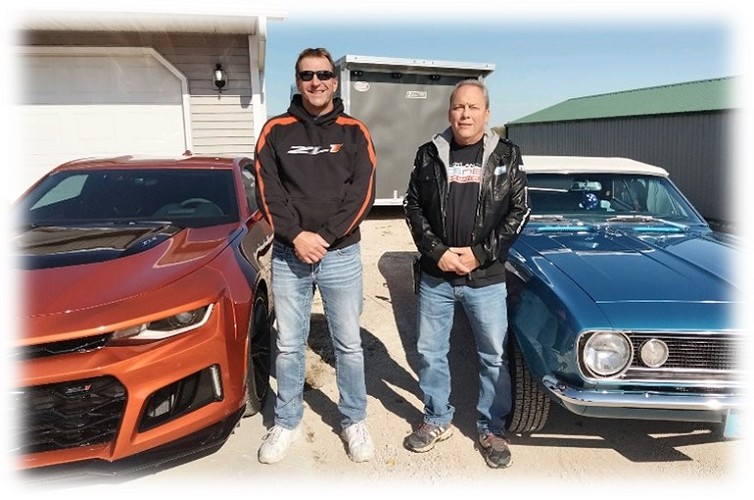 How the Wisconsin Camaro Club Came to Raises Funds for SCCCF:

I previously shared the story about “How SCCCF Became a Part of the 2022 Camaro Rally!”

That event along with a subsequent Wisconsin Camaro Club “Cars for Cancer” event brought in about $4,500 for SCCCF in 2022. Since then, I had the opportunity to sit down and chat with Billy Kreutz, Treasurer/ Sponsorship Director of the Wisconsin Camaro Club and Rob Zorn, fellow Camaro Club member and area cancer patient/survivor. Here are some excerpts from our conversation:

Who Is the Wisconsin Camaro Club?

Billy: The Wisconsin Camaro Club is comprised of about 2,700 members and Camaro enthusiasts. Our goal is to raise money for charities through our enthusiasm for Camaros. Being a bunch of Camaro nuts, we like to get together for car shows, cruises, and other events to raise money.

How SCCCF Became a Part of the 2022 Camaro Rally!

Billy: My lifelong friend, Rob, was diagnosed with esophageal cancer over a year ago. Rob and I have known each other forever. As his friend, I saw the change in his lifestyle. Obviously, a cancer diagnosis can be quite a financial burden and some of the medications that Rob has to take are extremely expensive. Of course, being the man that Rob is, he wanted to take care of his own bills. But he eventually accepted some relief and submitted some of his receipts. Within about a week he had a reimbursement check in his hand.

Photo (view PDF via link below): Billy Kreutz (left) and Rob Zorn (right) in the pits forty years younger in 1983.

Billy: Hearing this really inspired me to put my best effort forward to raise awareness for cancer patients who are fighting; financially or emotionally. As the Treasurer and Director of Sponsorship for the Club, I saw this as an opportunity to utilize the Club to give back; both in honor of Rob, one of our members, and on behalf of all those who are facing similar struggles.

We put the 2022 Camaro Rally together in a relatively short period of time. But, now that we have more time and already have some sponsors on board, we are planning for a bigger Camaro Rally in 2023, to be held again at Road America on August 24th, 25th, & 26th and, again proceeds are going to go to the Sheboygan County Cancer Care Fund! This past year we were able to donate $4,000 and, at this next event, I am hoping to double that in 2023 and we are planning other “Cars for Cancer” events.

Rob: Back in November of 2021, during deer hunting season, I wasn’t feeling well. My wife had just had COVID, but I had tested negative, so I went hunting with the guys. Mid-week of deer hunting I lost my taste and smell, couldn’t eat or drink, and progressively got worse. Eventually, my wife took me in to the ER and I tested positive for COVID. Because it was COVID, no one wanted to touch me, but they took some blood tests that showed my liver enzymes were high. That led to a CT scan, through which they suspected esophageal cancer that was eventually confirmed through a biopsy. Further testing had determined that the cancer had spread from my esophagus to my liver, my bones, and my adrenal gland.

Everything came on so suddenly and I really wasn’t prepared to hear that I had cancer. It was pretty grim! My wife and I were together when we heard the diagnosis and we both just broke down crying. Our nurse navigator suggested that we take the time to grieve for a couple of days... but then we should put it behind us and start to fight. That is what we’ve tried to do.

I’ve been feeling pretty good and treatments have been going well. The last scan suggested that the cancer may not be shrinking as much... but it appears treatment is still effectively managing the disease. I realize that my cancer is not going away – it’s not “curable,” but I am hopeful that we can continue to manage and control it. I am continuing with treatment and we’ll do more scans and re-evaluate in early 2023.

Photo (view PDF via link below): Rob Zorn shows his favorite Camaro at the 2022 WI Camaro Rally at Road America.

Rob: You really have to be vey positive when facing something like this, and I think I have been... with a lot of help from family, friends, and co-workers! They all help me keep my spirits up.

I’ve worked 36 years at Sargento. They’ve been very good to me through all of this. I’ve been on short-term disability since April and will probably go on long-term disability and retire from Sargento around April of next year.

Note from Tim: Back in July, while meeting with Billy at Road America to discuss the event, I mentioned the name of another race car enthusiast and long-time cancer survivor who, sadly, passed away a little over a year ago - Dave Deicher, only to discover that Dave and Rob were both good friends with Dave. I asked Billy to repeat that particular story.

Billy: Rob and I were a part of Dave’s pit crew when he raced for my Dad. It’s what we did and what we lived for! We had some great times racing with Dave in Plymouth, 141 in Frances Creek, Sturgeon Bay, Wilmont, Beaver Dam, Hales Corners. Eventually, Dave parted with my Dad and got his own race car, as did I.

When Dave was dealing with his cancer the first time, he sold his car. We could tell he really missed it. At one point he admitted that he really missed racing and he would love to get behind the wheel again. So, I asked him, “Why don’t you hop in my car and race it for a night?” He asked, “Are you serious?” I said, “Absolutely!”

The following week was the County Fair so we got him fitted for the car. He went out and qualified well, just two rows back in the feature. On the second lap, he took the lead and, through several pain-staking restarts (because anything can happen on a restart), he was able to hold everyone off and win the feature!

It was really satisfying to see that happiness back in Dave! The photo of him getting out of the car that night, with the excitement on his face, says it all (see photo via PDF link below)!

I think it was a really big night for all of us. I had hoped the experience might inspire him to get back into racing... and the following year he got his own car and was right back at it!

Photo (view PDF via link below): It was like Billy and Rob provided a special Camaro car show for me on the day of our conversation!

Mark your calendar (volunteers will be needed) for the 2023 WI Camaro Rally at Road America, August 24-27. Proceeds will once again benefit the Sheboygan County Cancer Care Fund!